Batman Park Indented Head camping is located off The Esplanade within the small regional Victorian Town of town of Indented Head, which occupies a small section of land on the western shore of Port Phillip Bay. Batman Park campground is one of 3 camping options in Indented Head: the others are Anderson Reserve and Taylors Reserve. We recommend that you book nice nad early to claim one of the sites positioned opposite the sand.

When camping at  Indented Head you can choose from beachfront or non-beachfront powered site from one of 3 holiday parks that are open during summer only. Batman Park is the largest park at Indented Head with views of the Ozone Wreck (Paddle Steamer) and is located directly opposite the general store and post office. Electric BBQ areas and playgrounds are available at Batman Park, Andersons Reserve and St Leonards campground Indented Head. Batman Park also has a camp kitchen, games room and dump point that can be used by all campers. Family and disabled bathroom keys are available for a small key deposit upon request. 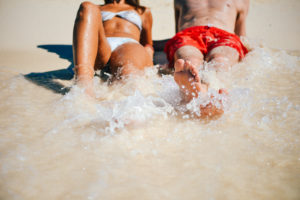 4WD Only Camping?
No